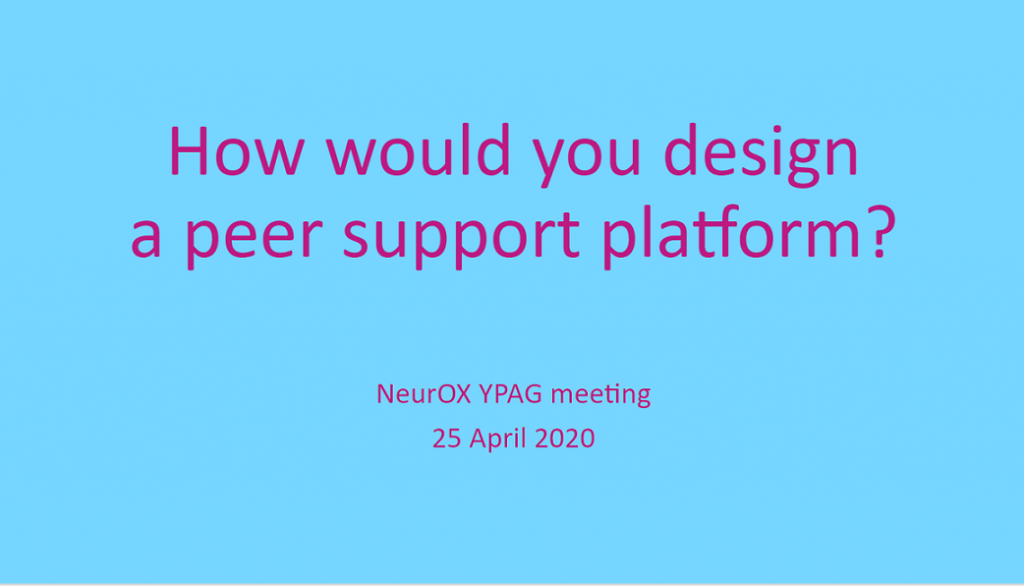 Amid the COVID-19 crisis, YPAG meetings are difficult, as is socialising and other sources of enjoyment for youth. Just after school closure, the YPAG conducted a survey with The McPin Foundation gauging how young people are dealing with the problem, with questions asking our main sources of concern, relaxation, and communication with peers. These results were then analysed by senior YPAG members, The McPin Foundation and Neurosec researchers. The conclusion was that youth would benefit from a peer support program to help with psychological needs identified in the survey.

It wasn’t long before a virtual YPAG meeting on zoom was underway, both an experiment of the platform and a chance to discuss and progress on the newly established long-term goal: to develop a peer support training and intervention program. Before the meeting members were sent an example website which we looked through noting down our likes and dislikes for reference when trying to design a similar resource of our own.

After a cheery introduction with all the members, the group split into smaller groups of around five, set on the task of designing a peer support program for youth. The task was approached sensitively, with the aim of providing genuinely wholesome support for struggling youth, but it was also obvious that members enjoyed this opportunity to socialise during lockdown. Ideas were brainstormed rapidly and recorded on Padlet. Researchers were presented with a range of exciting ideas, with common suggestions being community- or group-based peer networking, or one to one messaging in which the counsellor was a well-trained anonymous person or a close friend, making it easier for the young person to open up and get help. We also provided suggestions for the branding, target audience and availability of the platforms.

With some final comments in the main group about the success of the online format, and the resolution to develop the ideas, the first part of the meeting was a success for both the young people and the researchers. 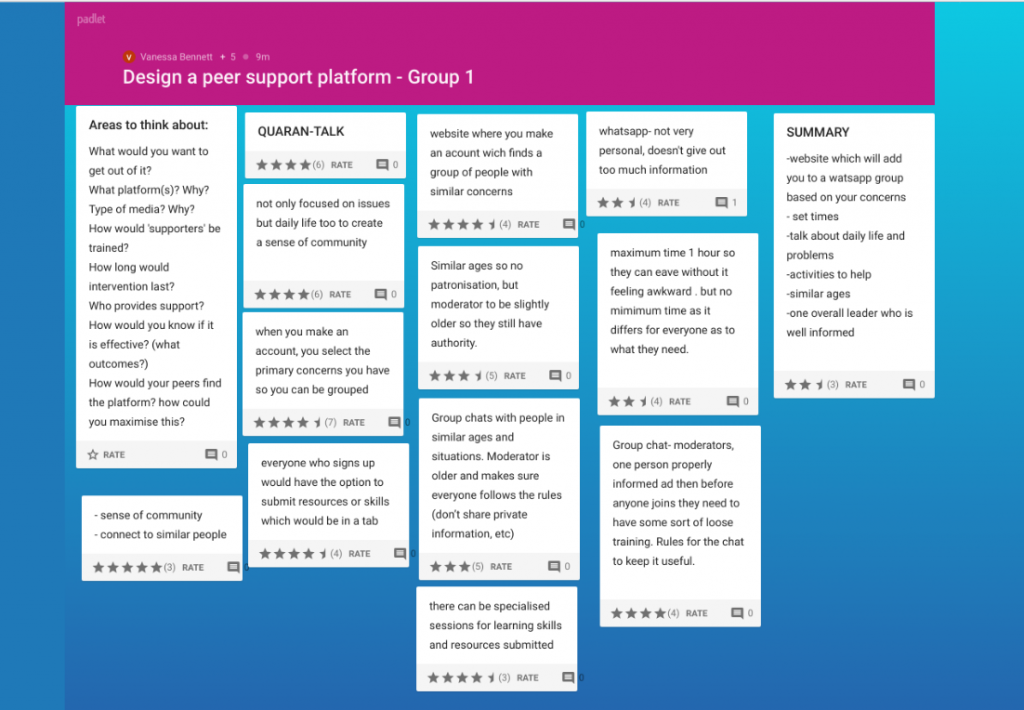 In the second half of the meeting, we listened to a researcher from The Topic Group, Elise Sellars, who shared her findings of a review of the scientific literature of health-related studies involving YPAGs. She found that YPAG members were used in only a small percentage of research projects and similarly papers about YPAG use showed they were used very little to interpret the results. Furthermore, if YPAGs were used it would be mainly in the first and last stages of a research but overall had a low active level of involvement throughout (even if research not about young people could benefit from their thoughts and views). She questioned us during the video-call about what she could do to involve more young people and how she could do that. It was remarkably interesting to hear how young people are helping to positively impact research and to help further ideas on how to improve communication of the research to the reader.

The last part of the meeting was more specific to YPAGs in general as we discussed how we could get more people to become members of YPAGs and how we could increase young people’s involvement in mental health research. This linked with the first half of the meeting as we had similar ideas on how to get people to join YPAG and how to involve them in communicating Elise’s research which was more focused on health-related studies. I got involved in the group through an email from my school and I saw it as an opportunity to further my knowledge on mental health research and believed it would increase my confidence as it would be a new and interesting experience. After only six months and only a few YPAG sessions I think it has helped me to do that.

During the coronavirus pandemic, we were unable to meet in Oxford as we normally would, so we adapted and used the online video meeting platform, Zoom, to meet within our own homes to stay safe and stay inside. Overall, I enjoyed the meeting and still enjoyed talking to my fellow YPAG members, Vanessa, Gabriela (our YPAG leaders), representatives from The McPin Foundation and Elise.