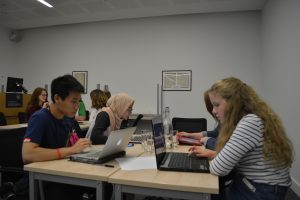 We are Arianna and Gabi, YPAG facilitators, and here is an update on our latest YPAG meeting, which took place on the 24th of June at the Mathematical Institute.

During the first half of the meeting, we were pleased to have Elizabeth Nuthall, Lucy Palmer and Triona Cassey from the Department of Psychiatry. They work for a fascinating research project called MYRIAD, which investigates whether mindfulness techniques can promote young people’s resilience. They explained to the YPAG that, as part of the study, they are introducing mindfulness courses in schools all over the UK. Before actually going to schools, however, they wanted to get young people’s feedback on the questionnaires they were planning to use. That’s where the YPAG came in! It was really interesting and stimulating to hear about the project and we were all very excited to make our contribution to the success of the project. We hope the MYRIAD team will come back to tell us about the results, and also teach us some mindfulness!

The second half of the meeting was focused on learning more about different mental conditions. The YPAG worked in four small groups, and each group focused on one condition: ADHD, conduct disorder, autism and psychosis. They looked into diagnostic criteria and early signs (including behavioural and biological markers). Each group also reflected on social and ethical implications of the possibility of predicting the development of a certain mental condition based on early signs, before symptoms actually come up. At the end of the day, groups presented their ideas to one another. We had an interesting discussion on the promise and peril of diagnostic/social labels, and the powerful impact of risk predictions. The presentations were really insightful and well put together!

Overall, it was an exciting afternoon of learning and fun, and we look forward to seeing everyone again at the beginning of September.