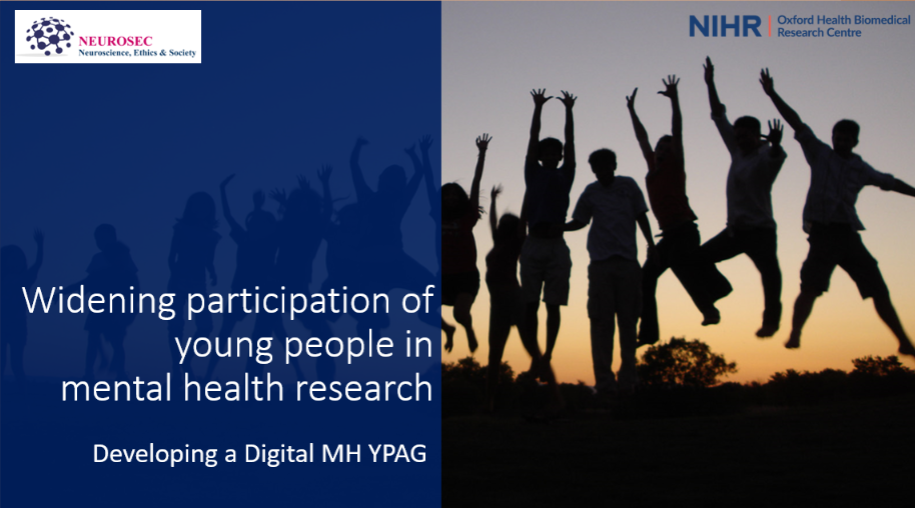 When trying to ensure research is meaningful, it is vital to have a diverse group of young people to accurately reflect teenage society. This means including the advantaged, the disadvantaged, those with and without mental health challenges, different identities and minorities where possible.

Measures can be taken such as:

It is particularly important to cater for the specific individual needs and interests of all members, which is why having an assortment of roles available is key to making sure everyone feels and is useful. In the NeurOx YPAG, an informal “contract” was discussed in one of the first meetings, in which members and researchers enquired about expectations of each other, which is an effective way to make sure both that individuality is accommodated, and that all members can easily participate within their skill sets and comfort zones.

Digitally, this can actually be easier for some (but not all) people – for some who are less confident, speaking to the group over a video call can be less daunting than in real life. Also, doing the meetings online is a lot more convenient for those who would have had to take a bus or a car journey to the meeting.

Encouraging young people to use their voices

Essential to a YPAG’s effectiveness is making sure everyone can voice their opinion. To facilitate this, step one is two firmly establish that the YPAG is a non-judgemental space and that all ideas and opinions to be considered equally. Also useful, is creating an environment where the young people can make friends, thus allowing them to more effectively brainstorm with each other, and increasing their confidence to put ideas to the group. In the NeurOx YPAG’s face to face meetings this is done by giving young people time to get to know each other with food provided, a pool table and table football.

Digitally this is more challenging, however an effective (and popular among members) approach is to split the main group into smaller “breakout rooms” of around five, which gives everyone a better chance to speak, and a smaller audience when they do, which can increase confidence. Some prefer writing and can contribute in different ways. Ideas can be recorded on the interactive notepad website “Padlet”, and confident members of the breakout rooms can present these to the rest of the group.

Influence and transparency in YPAGs

The name “YPAG,” short for Young Person’s Advisory Group reflects the advisory role. The acronym was adopted by the NeurOx YPAG because of its universal acceptance as a standard term. However, members are involved at a number of levels from advisory to co-production.

To aid smooth discussion and to aspire to co-production it is necessary to have a suitable balance of power between researchers and members, and older members and younger members. It is crucial that young person involvement doesn’t just become tokenistic and a brief consultation of the members at the end of a project ticking the box for funders. However, it is also sometimes impractical for young people to be involved in every phase of the research. Transparency of information among researchers and members is an easy way to improve participation and productivity with respect to this.

The ideal scenario is one in which young people’s difference in perspective and opinion, and what could be called their “social expertise”, is utilised to the full. Whilst the researchers will be responsible overall, it is found beneficial when members take part in the analysis and dissemination of research, as well as its design and undertaking. In the NeurOx YPAG a “co-ownership” of the research is established, as well as acknowledgement of young people’s participation or co-production where such is due.

In the earlier mentioned “contract” drafted by young people, it was expressed that members would like to receive information wherever possible about the progress of their research projects, the results, and the impact. They also wish to receive training wherever applicable so as to accumulate experience and skills in research techniques.

When it comes to power balance between the younger and the older members, again it is best to play to the strengths of each individual to achieve this. In terms of validity of opinion, both groups should be equal. However, there may be different projects suited more to one group or individual than the other, due to varying familiarity and experience. Also, members who have been in the group longer may be useful in facilitatory roles, helping lead the whole group meetings, as they will be more familiar with proceedings and can provide a more relatable friendly face for the newer members. This is appreciated by the newer members as it is a lot less intimidating in the first few sessions to have other young people presenting.

In digital meetings the power balance is best distributed by having researcher(s) present information at the start and then prompting idea sharing and debate among members, who will then split off into smaller breakout rooms. In each breakout room there will be either a researcher or a senior YPAG member who will lead the discussion. 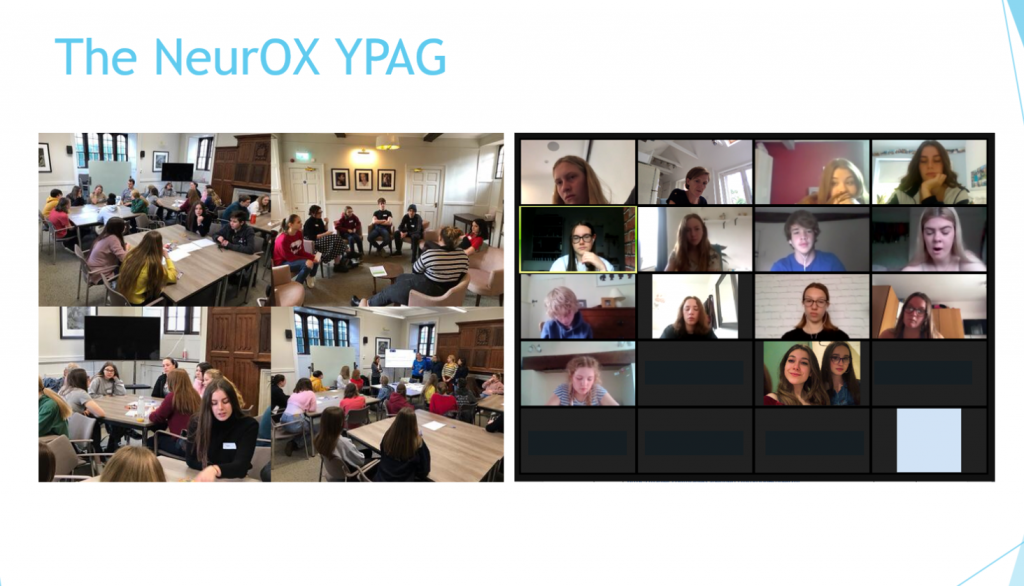 Group members vary in how willing they are to dedicate time to the group, and the extent to which they like to contribute. This is accommodated for in the NeurOx YPAG by offering a “layered approach” in which YPAG members are offered numerous opportunities in addition to the meetings. This could be writing blog posts, presenting at conferences, co-writing manuscripts and more.

It may be the case that for a meeting it will be useful for members to have completed an activity such as prereading. This is acceptable to young people as shown by a post meeting survey, keeping it short, engaging and leaving enough time before the meeting for members to complete it is likely to optimise participation nevertheless.

With all the meetings being run digitally, a practical way of allocating additional activities and opportunities is through a shared Google spreadsheet, with a short description of each task for members to sign up for as they please.

If you’re a researcher interested in the development of the YPAG, we’d love to chat. You can get in touch with us at vanessa.bennett@psych.ox.ac.uk