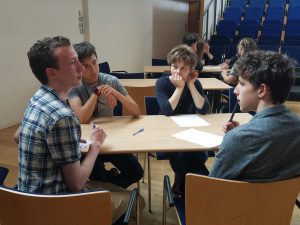 On the 10th of June YPAG Group 2 met for the second time to discuss issues concerning mental health of young people and aid in the development of several scientific studies conducted by talented researchers. Corpus Christi Collage was the location of this session, which is the same venue we used in the last meeting; like most Oxford Colleges, it really is quite stunning.

To start the meeting, Professor Mina Fazel (a researcher in the Department of Psychiatry at Oxford University) gave us a controversial issue, which put us all in a conflict of two perspectives. In summary, the issue was “Should parents be told when their child sees a therapist?” and it was a follow-up to a questionnaire we got given to acquire out opinions on how therapy should be conducted, namely by a CAMHS (Child and Adolescent Mental Health Services) worker. While we all had strong opinions that parents should not be involved instantly for the benefit of the young person, the dilemma arose as we were asked what our parents might say. When considering this, it was clear that as a parent your views would be very different. It was really quite a perplexing issue.

There was two main sections to the meeting and next we looked at how to assess morality in young people. Our assessment had to be built around the challenge of working out how a young person would interact with such an assessment and how to design an interface around this. Some were focused around presenting the questions directly with an app to ask a young person a particular question with particular categories for them to pick from, while others tried to abstract the questions into a format where the young person does not know they are explicitly about morality.  To adhere to the scientific method, we concluded a combination of the options listed could be used to either see which is more effective (by comparing if young people were more likely to be less cautious with their answers if they did not know it was about morality) or, to collect two different sets of data.

Although these were the two mains sections, the meeting was concluded with a presentation from some of our members, summarising the goal of a YPAG group. Later, it would be showed at the “Ethics and early intervention in mental health: Promoting change through research” research day, which I am sure representatives of our group were honoured to attend. It was very well crafted and well-presented when we saw it, and I’m sure it was too on the day, so we would all like to thank Jessica, Niamh, Rohan, and Sophie, for giving up their time to both create the presentation and represent us with it.