In April 2020, as our small way of contributing towards flattening the curve; of not only COVID-19 but also Mental Health, we held two webinars over WhatsApp, focused on promoting mental health in these difficult times. In the first session, our panelists – young people trained as medical psychologists, alongside an experienced psychiatrist – talked about fear, anxiety, loneliness, loss and depression. The second explored post-traumatic stress and child mental wellbeing amid the crisis.  We asked the 280 young people in Kenya who attended both webinar sessions to contribute to a survey. 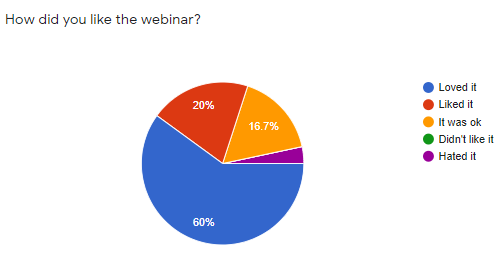 More than three quarters of the respondents liked or loved the webinars
80% of the respondents were young people aged between 21 and 26 years old with a slight majority being female. With regards to the general assumption of both webinars, 60% of the respondents reported loving them, with a further 20% liked them. Most attendees left us a note saying they liked how educative the webinars were, informative and eye opening to them. Others liked the interactive nature of the webinars, especially welcoming the Q&A section, which had intentionally been allocated plenty of time. However, most of them agreed that the allocated time wasn’t enough – subsequent webinars could improve in this regard, as well as including more audio notes and infographics, which were particularly well received. The choice of WhatsApp as a platform was a good one – it was comfortably the most preferred channel among the many Kenyans seeking to join online mental health conversations.  Other platforms such as Zoom, Facebook and Instagram attracted some support, but also sizeable opposition.

The pandemic is crippling not only economies, but also the wellbeing of young people as most responded having fears around lost jobs, salary deductions and raised levels of anxiety and stress.  Fears around their own health was a major challenge during Covid-19, while others feared the fact that the health system was unable to handle the pandemic.