In the early months of this year, BeGOOD Citizens Early Intervention Ethics was delighted to launch one of its latest research studies involving young adults who have biological grandparents with Alzheimer’s, led by the Neuroscience, Ethics and Society Group at the University of Oxford and funded by the Wellcome Trust. As a medical student at the end of her second year, I joined the team at the Department of Psychiatry to interview young people between the ages of 16 to 26 years to study how they understand the condition of their loved one, as well as to gauge their views on novel techniques, namely predictive genetic testing, that may be widely provided in the foreseeable future to help predict the risk of the disease.

In the last few decades, there has been growing investigation into early genetic diagnostic testing for a myriad of diseases, including obesity and breast cancer. Research on Alzheimer’s disease is continuously ongoing, with more studies added to the literature each year. From work pioneered by a myriad of scientists, it was found that the presence of a particular allele, APO-e4, conferred a higher risk of getting Alzheimer’s during old age. For people with one copy of the variant, this gives them a 4-7% increase in lifetime risk at age 75; the risk increases at the age 85 and for those carrying two copies of the allele (all the figures are based on people of European descent). It is important to note that not everyone who has this allele will get the disease and not everyone who has the disease has this allele, and research is still clarifying the degree that genetics determine the risk of developing the disease.

There are a variety of reasons for, and against, genetic testing for diseases in general with ethical, financial and practical factors taken into account. Papers detailing this in regard to Alzheimer’s disease have found that diagnostic (predictive) genetic testing would be most popular amongst groups who perceive their risk to be highest, including those with a blood relative with the disease and carers of those living with the condition (Wikler et al., 2013). Recent research explored the phenomena of both genetic essentialism and genetic invincibility, with patients believing their fate lies in the hands of DNA. This has led to pessimistic feelings over the course of the disease (Lebowitz et al., 2013) as opposed to a more optimistic approach when the condition is divorced from any genetic influence. Research has discovered the powerful psychological effect genetic predisposition has over patients increasingly the likelihood that patients do things to prevent the development of the condition (Ahn et al., 2018), reinforcing the phenomenon of genetic essentialism.

A review of young people’s values, preferences and experiences on early genetic diagnostic testing is missing from current research. BeGOOD Citizens is interested in understanding their attitudes towards predictive (diagnostic) genetic testing for Alzheimer ’s disease and its implications on their lives. There is a lack of understanding as to why young people choose to get tested or not, and how this links to what they expect the effects of being tested are. Our current study is conducting interviews using a series of questions, which BeGOOD’s Young People’s Advisory Group (YPAG) helped to develop. We expect that there will be different responses, reasons and experiences among participants for taking a predictive genetic test or not.

BeGOOD will shortly end recruitment for this study. Finding participants was made a whole lot easier using Facebook; posting on a few Oxford student pages attracted people who came forward to talk about their experiences. We aim for the young people’s views and experiences identified in this study can help clinicians in the future if a better predictive test of Alzheimer’s comes along and is implemented in practices nationwide. It is clear that predictive (diagnostic) genetic testing breeds a whole host of issues, and may be deemed as controversial by some, putting in question whether it is worthwhile or not.

About the author – Lamis Hamdi 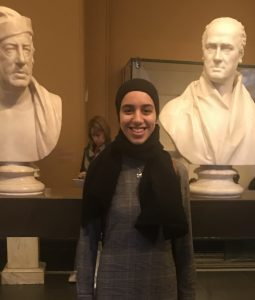 Lamis is a second-year medical student at Oxford University, who joined BeGOOD Citizens EIE for her student place this summer to work on our study on the ethics of predictive genetic testing in Alzheimer’s Disease alongside the BeGOOD team.