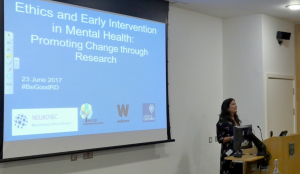 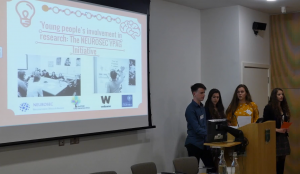 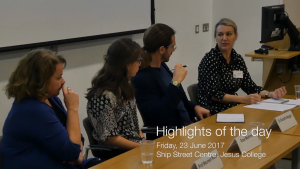 A year ago, on the 23rd of June 2017, the BeGOOD Team hosted an exciting event that brought together leaders of non-profit organisations, policy experts and researchers to discuss their approaches to early intervention (EI) and ethics in mental health. Panels revolved around four core themes, all of which are central to the BeGOOD Project: ‘Researching Families, Transforming Communities’, ‘Psychosis Risk: From Research to Practice’, ‘Young People’s Voices, Young People’s Citizenship’ and ‘Research for Change.’

In this post we revisit the day, remembering the many sessions, speakers and themes that came up. Watch the highlights of the research day below or a presentation on the research conducted by the young people advisory group.

‘Researching Families, Transforming Communities’ set us off to a great start, covering a range of relevant ethical concepts. Dr Rodolfo Maggio discussed the fundamental notion of good, and how different actors within EI initiatives (e.g., parents, practitioners, researchers) offer unique understandings of what good means. Rose Mortimer analysed hope: how it arises, transforms and sometimes falls in defeat during challenging social circumstances such as raising a baby in prison. Ideas of freedom, privacy and autonomy emerged in Dr. Jan Macvarish’s critique of EI: does EI medicalise and constrain family life and parenting? Prof. Maureen Kelley also challenged the EI paradigm: by focusing on early years, do we run the risk of overlooking the needs of older children? Could the strong discourse surrounding early intervention make teenagers feel that they are ‘lost causes’?

‘Psychosis Risk: From Research to Practice’ was equally stimulating, and included an exciting journey through EI services in psychosis in the NHS, led by Prof. Belinda Lennox and Dr Matthew Broome. They talked about how this initiative was born out of great hope and enthusiasm, at a time when empirical evidence was still lacking. Fifteen years later, enough evidence has accumulated supporting the efficacy of EI for psychosis; however, as Paolo Corsico pointed out, personal hope remains a central theme for both service users and clinicians involved in EI for psychosis. Expanding on this point, Dr. Dorothee Horstkötter coined the concept of meaningful hope, which refers to the notion that patients’ hopes are not (only) centred on mental health issues. They hope for all kinds of positive future outcomes such as having a new job, meeting new people and learning new skills. If we only consider hope in relation to the mental illness itself, we miss the chance to learn about the whole picture of a patient’s life and what matters to them, which go far beyond mental health concerns.

‘Young People’s Voices, Young People’s Citizenship’ explored young people’s participation in ethics and mental health research from different angles and perspectives. Arianna Manzini challenged the view of children as ‘unfinished adults’ and made a strong case for involving young people in ethical debates surrounding EI. Dr. Melissa Nolas and Dr. Gabriela Pavarini added that in order to get closer to young people’s attitudes we need new methodological tools, including creative methods (e.g., drawing, photographing) and digital approaches (e.g., videogames, digital diaries). On a cautionary note, Prof. Essi Viding reminded us that ‘young people’ is not a homogeneous group, and that ‘different brains require different methodologies’. As researchers we should be sensitive to participants’ needs and dispositions, particularly when the project involves young people with mental health difficulties, and design our research tools accordingly.

The next panel focused on ‘Research for Change.’ Prof. Ilina Singh started off by advocating for greater ‘reach’ in empirical bioethics, given that the current literature is largely based on small scale studies. As change and reach entail stepping outside the academic sphere, the final panel also included leaders of two important non-profits in mental health: Dr. Cynthia Joyce, CEO for MQ, and Mr. Tom McBride, Director of Evidence at the Early Intervention Foundation (EIF). EIF has played a key role in assessing evidence for the effectiveness of early intervention programmes (see EIF Guidebook here), whereas MQ has been fundamental in advancing research in mental health more broadly.

The final panel also included four representatives of the NEUROSEC Young People’s Advisory Group (YPAG). Jessica Katz, Niamh Walker, Rohan Smith and Sophie Speakman shared their experiences as members of the YPAG, illustrating the value of designing and conducting research in true partnership with young people. In closing the panel, Mr. Nick Fahy shared insights on how to translate research into policy. In his words, ‘policy is not about academic enquiry; it’s about certainty, simplicity and action’: it is essential to frame research in the right way, engage with the right people, and, perhaps most importantly, tell good stories.

In addition to the speakers the event included delegates from a wide range of disciplines, who actively contributed to the discussions. It was great to have so many different voices in the room, including YPAG members, psychiatrists, bioethicists and leaders from the third sector, highlighting examples of good practice, raising concerns and sharing experiences. The depth and liveliness of the discussions was a proof of how strongly everyone involved feels about EI. It was also a beautiful reminder of the immense value of the BEGOOD Project. Even remembering it a year later we are buzzing and inspired, filled with new ideas and renewed motivation. 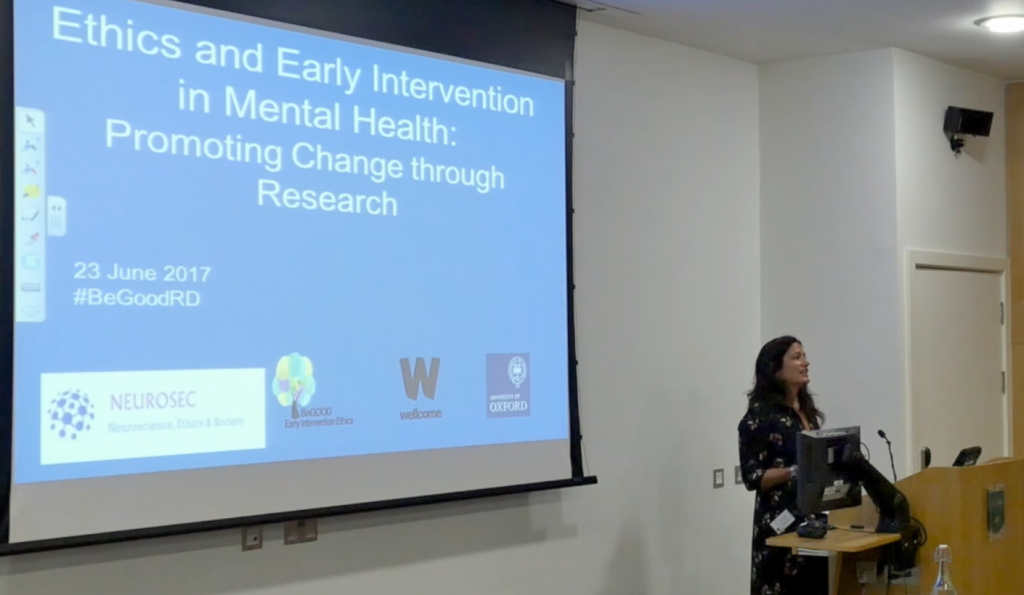